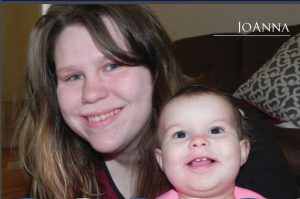 JoAnna decided to take her daughter and leave a toxic relationship with her husband when he placed her in a dangerous situation. With nowhere she can turn for support, JoAnna and her four-month old daughter, May, sought refuge at a shelter. JoAnna became overwhelmed trying to navigate all the resources. JoAnna was not only feeling the stress of the sudden change; May was as well. She would cry throughout the night at the shelter. JoAnna felt as if she were drowning but had to stay strong for her daughter.

Eventually, JoAnna was introduced to Mary, a Health Home Care Manager at Central New York Health Home Network (CNYHHN) through her therapist at the Upstate Cerebral Palsy Community Health and Behavioral Services clinic. Mary became JoAnna’s and May’s advocate. She got JoAnna and May into a domestic violence shelter and coordinated their care and services. She supported JoAnna as she was adjusting to being a single-mother and connected her to resources, such as food and shelter. Mary was able to find JoAnna and May a permanent home and still helping them as they adjust to their new life. May is now able to sleep through the night, as well!